Your Story.
Your Settlement.

“I’ve worked hard to develop a reputation for professional excellence.
Below are a few professional recognitions that I am especially proud of.”
—Charlie Donahue 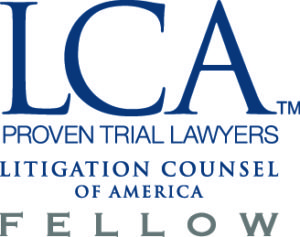 Litigation Council of America was established because too many lawyers were boasting of memberships in various so-called honor societies, as if they were top-notch.

This is the premier, outstanding honor for trial lawyers, which sets them apart from the others.
It selects less than .05 % of all trial lawyers in the country, and that’s a very select group.
Members are chosen for professional and ethical superiority. Charlie Donahue was bestowed membership in 2016. Charlie is a member of the Trial Law Institute and Diversity Law Institute.

And, while he is not the kind of guy who likes to brag about his accomplishments, it is important these days when any Tom, Dick, Harry or Jane, is advertising their qualifications, to present his own qualifications.

In doing so, it is Charlie’s sincere belief that the best lawyer in the world is the one who puts his or her heart and soul into any case and does the job for a client. He’s not interested in boasting, bravado or tearing any other lawyer down, only on becoming the best lawyer he can be.
In the final analysis, those who stand up for the individual and against the power structures and insurance companies that suppress people are comrades and friends in the battle.

Avvo.com is a leading national lawyer rating website. They have awarded me with their highest possible rating for ethical standards and legal abilities. View my profile on Avvo.com.

Martindale-Hubbell® Peer Review Ratings™ are the gold standard in attorney ratings, and have been for more than a century. I’ve earned an AV Preeminent Peer Rating for highest level of professional excellence. View my full profile on Martindale-Hubbell.

I was one of 52 lawyers chosen to live and work, for almost a full month, with legendary trial lawyer Gerry Spence and his staff of some of the country’s best trial lawyers. As a graduate of the college I joined a brotherhood of Warriors for Justice with great connections across the country.

It is no exaggeration to say I have connections across the country with some of the best of the best. I’ve been called in to assist fellow Warriors for Justice work on very important cases in Louisiana, Illinois, Texas, Florida, California, Utah and Wyoming. I credit my work with such great lawyers and terrific human beings as helping me grow both as a lawyer and as a person.

I also attended and received a certification for participating in The Trial Lawyer College Regional on “Discovering the Story” in Key Largo, Florida in Jan 2013, and the Regional in Round Top, Texas in May 2013 on “Closing Argument.” I continue attending workshops and conferences in my ongoing quest to be the best attorney possible for my clients.

Established in 1993, the Million Dollar Advocates Forum is one of the most prestigious groups of trial lawyers in the United States. Membership is limited to attorneys who have won million and multi-million dollar verdicts and settlements.

There are over 4000 members throughout the country. Fewer than 1% of U.S. lawyers are members.

For A Free Consultation